The big day is here, and the stage is set.

The culmination of years of hard work has come to an expected end. As guests fill the seats at Coleman Coliseum, graduates pour into the arena.

Holding high a wooden ceremonial mace, the commencement marshal leads The University of Alabama’s senior administrators into the coliseum in the final processional.

The mace used during commencement ceremonies is not just any piece of ornately carved wood. The same mace has been used in UA commencements since May 1987, and its history extends far beyond that. In fact, its primary component is older than the 188-year-old University itself. In 1982, a windstorm blew down the famous and venerable Gorgas Oak, and from its fallen timber Sebron E. Kelly, a retired superintendent of building maintenance, along with maintenance staff, crafted The University of Alabama’s official 52-inch long commencement mace.

The entire head of the mace is set with four bronze castings on each of its square sides. Each casting depicts a different image symbolic to the University. The first bronze casting is the official seal of the University. The second is Denny Chimes. The third casting is a triangle framing the lamp of knowledge with the words of the University’s mission: “teaching, research and service.” The fourth is Clark Hall, one of the oldest classroom buildings on campus and home of the College of Arts and Sciences.

Carried by faculty, crafted by staff and used to honor students, the Capstone’s ceremonial mace encapsulates the very identity of The University of Alabama. 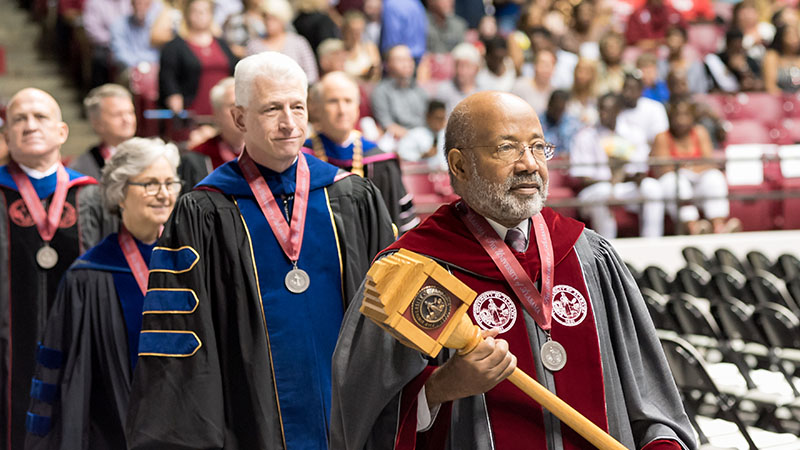 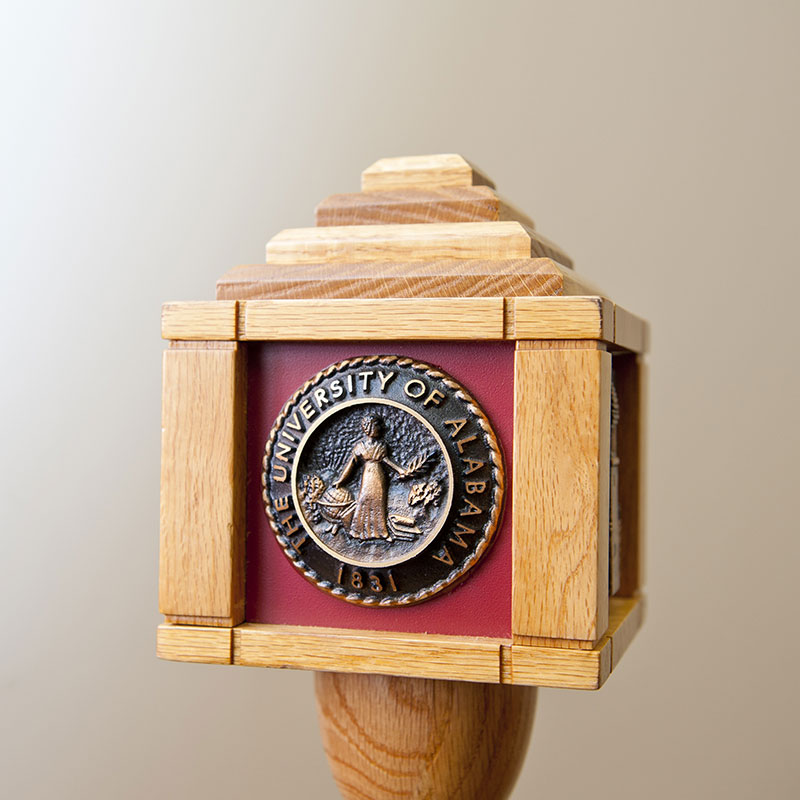 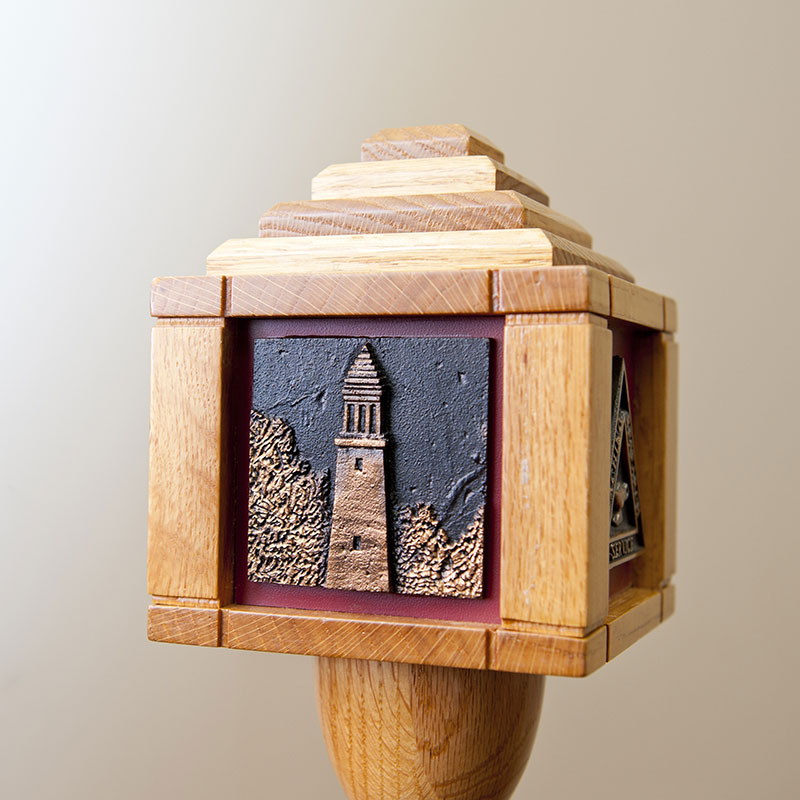 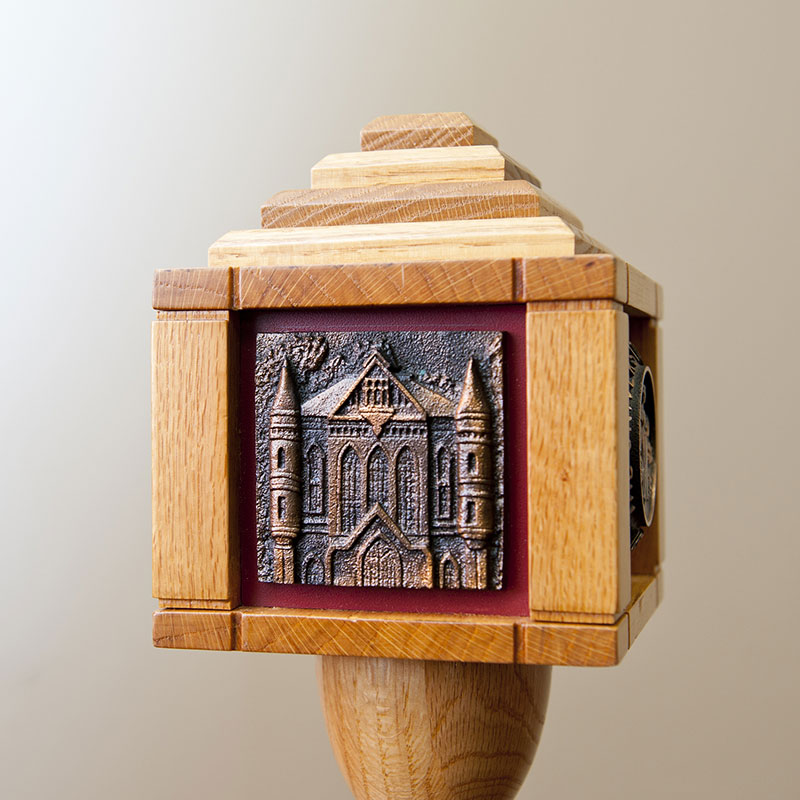 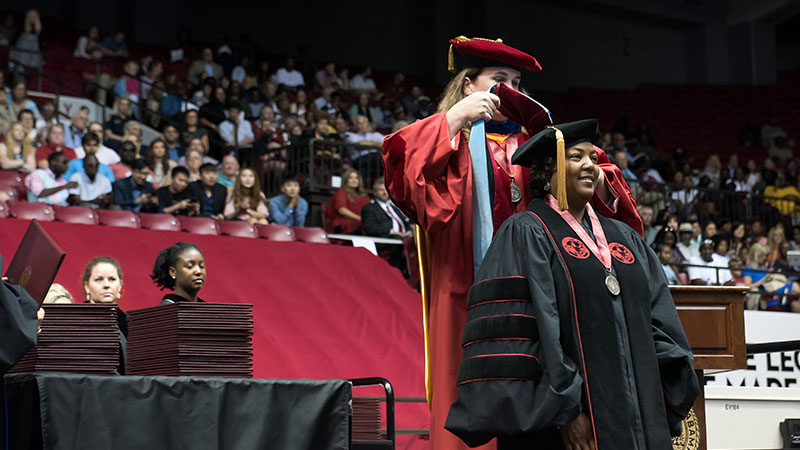 The history of the black vestments worn by students during university commencement ceremonies goes back as far as nine centuries.

But all caps and gowns aren’t created equal.

Starting in the fall of 1999, a new more modern gown was authorized for all University of Alabama students earning a doctorate degree.

It’s an elite tradition that the University now celebrates its 20th anniversary of following.

“We were looking at getting new gowns for the platform and had discussion about having graduate gowns being different from the gowns worn by students earning bachelor’s and master’s degrees,” said Michael George, a retired University registrar.

“That led to a discussion about doing something more stylish and up-to-date with the doctoral gowns, and that’s what we did.”

Designed for distinction, the more ornate doctorial gown with the Capstone’s original crimson seal emblazoned upon both breasts and traditional doctoral bars piped with crimson festooning the robes voluminous sleeves, was first worn at the May 2000 commencement ceremony.

From the voluminous gowns to the various multi-hued stoles of honor, the regalia of The University of Alabama’s commencement ceremonies is replete with grandeur.

But as inspiring a spectacle as the attire of all those participating in the ceremonies, perhaps no adornment draws the eye like the gleaming sparkle of the presidential chain of office hanging around the neck of the University president.

According to Medallic, ceremonial chains of office have honored the highest officials of educational institutions as permanent symbols of those institutions for centuries.

The new tradition of UA’s 24k gold-plated presidential chain being used in commencement ceremonies began in 2013.

“We bought the chain in March 2013 at the request of President Judy Bonner,” said Michael George, a former UA registrar.

“She visited a university and saw a presidential chain of office there and thought it’d be a nice touch. We found out who the vendor was who put them together, purchased it and added the names of every University president and their term as president on each link.”

Jan Hamner, assistant to registrar, said every time the University has a new president another link will be added to the chain with that president’s name on it.

The chain was first worn in a commencement ceremony in May 2013 and has been worn by UA presidents at every commencement since. 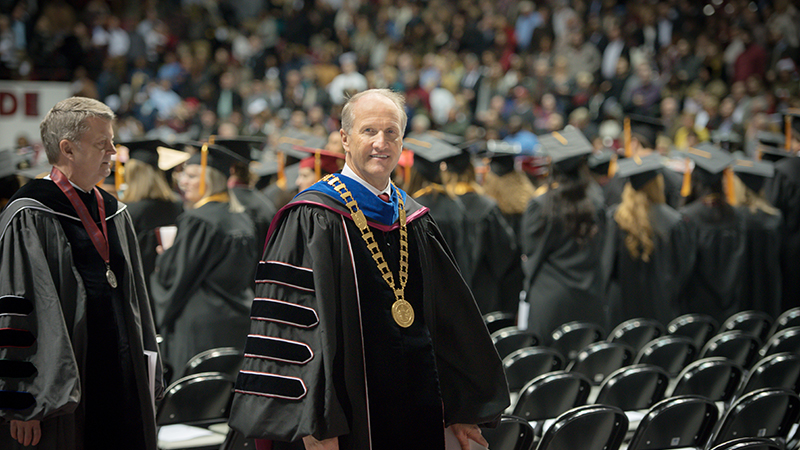